What Is Earth For?

“The care of the Earth is our most ancient and most worthy, and after all our most pleasing responsibility. To cherish what remains of it and foster its renewal is our only hope.”

I’ve been entranced by the dynamic interdependence between land and people all my life. It raised a question: what is land for? I lived on a farm for the first six years of my life, though my parents were not farmers. We had goats, horses, and a corn-farming neighbor. The answer to my question was easy – land was cool. After a move to Phoenix, I discovered the desert. I hiked it to escape family disharmonies. I surveyed and excavated its prehistoric secrets. The answer expanded – land was also freedom and mystery. Then the desert began to disappear, acre by acre, to development. I worked for its protection and despaired for our greed. The answer to my question now included wilderness and public lands. Soon, I realized the answer went deeper – land was history, culture, food, trust, and care. My activism changed. I worked with ranchers. I became aware of a world of wounds, to quote Aldo Leopold. My work expanded to include fixing creeks, collaboration, and the radical center. I wrote and spoke about working lands. I became a cattle owner and a local producer of grassfed beef. My educational curve steepened. I worried about climate change and carbon dioxide levels. Drought and heat. Resilience became my watchword. I began writing books about land and people. And carbon. I gave talks about solutions. As I traveled, my concern grew. I saw crisis and opportunity. I reframed my question: what is earth for?

In 1960, when I was born, the world was still precedented. Three years earlier, the USSR launched Sputnik into orbit. Rachel Carson’s warning Silent Spring was two years away. Earth Day wouldn’t happen for another decade. The Internet wasn’t even a gleam in an engineer’s eye. The term ‘global warming’ would not debut for another fifteen years. The carbon dioxide content of the atmosphere in 1960 was 317 parts-per-million (ppm) – still within normal going back two million years. Sixty years later, we’ve added 100 ppm and pushed the climate system to a precipice. In 1960, the world’s wildlife was largely intact and seemed safe. Today, one million plant and animal species are threatened with extinction and land degradation is widespread. In my lifetime, humans went from a having a small impact on the planet to being the predominant force for unprecedented change on a geological scale. Sixty years!

As evidence, here’s a graphic from a science article. The researchers studied global indicators to understand how fast human impacts were taking place at earth system levels – i.e., to oceans, land, and the atmosphere. They discovered our impact had grown from small to colossal. The magnitude of alterations to the natural world was (and continues to be) unprecedented, they wrote, and humans are now the primary driver of change on the planet:

Steffen, et al, “The Trajectory of the Anthropocene: The Great Acceleration” Anthropocene Review, January 2015 (updated from 2004) – the year 1950 is in red.

Then there’s the Ice Age cycle. There are strong indications that the quantity of carbon dioxide already accumulated in the atmosphere has caused enough warming to push the earth out of the ice cycle that has existed for millions of years. Glacial conditions on the planet give way to warmer temperatures every 100,000 years. The oscillation between glacials and interglacials is predictable. However, according to scientists at the Potsdam Institute for Climate Impact the next glacial period may be significantly delayed – if it happens at all. “The bottom line is that we are basically skipping a whole glacial cycle,” said researcher Andrey Ganopolski, “which is unprecedented. It is mind-boggling that humankind is able to interfere with a mechanism that shaped the world as we know it.”

Hans Schellnhuber, a co-researcher, noted that we owe our fertile soil to the last ice age, which also created many familiar landscapes including glaciers, rivers, fjords, lakes, and moraines. Today, however, it is humankind that will determine the future development of the planet. “This illustrates very clearly that we have entered a new era,” he said, one in which “humanity itself has become a geological force.” 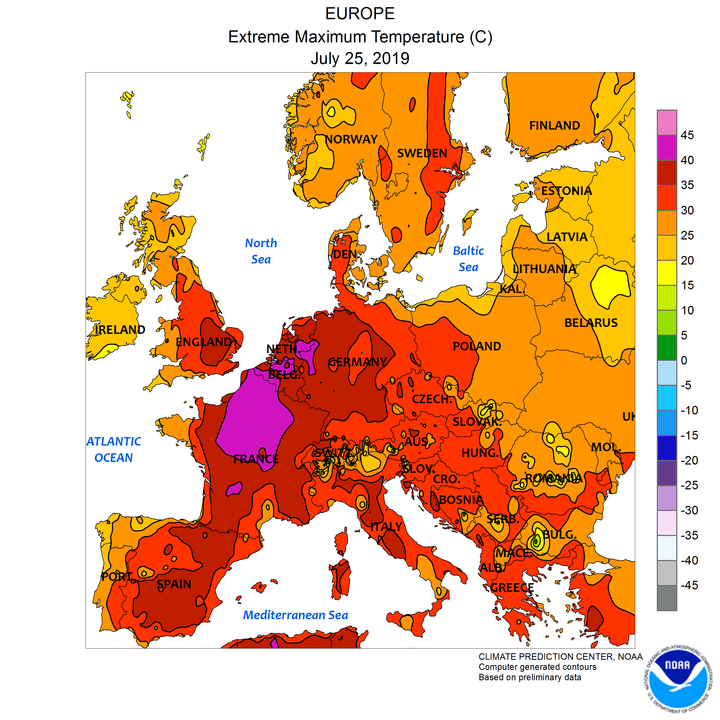 All of this hit home for me on July 25, 2019, as Gen and I traveled from Berlin to Prague by train on a blistering, record-smashing day. It was a heat wave, as I learned later, but not just any heat wave. In Paris, the thermometer hit 108.7° F (42.6° C), demolishing a record that stood since 1947 by four degrees. Germany set an all-time temperature of 108°. It was a similar story in Belgium and the Netherlands where both countries hit 107°, burying previous highs by six and five degrees respectively. The Met office in England reported a reading of 101.7° at Cambridge University, breaking the previous record and marking only the second time temperatures had ever reached triple digits in the United Kingdom.

One meteorologist called the day astonishing. Heat records are usually set by a few tenths of a degree, but the marks that fell on the 25th were obliterated. No wonder our train compartment became a sauna! I could certainly sympathize with the passengers on a Eurostar train in Belgium that broke down and were not allowed to open windows or leave the train out of safety concerns. A passenger on the train was quoted saying “I have never been so hot in my life.”

News stories confirmed the culprit behind the unprecedented heat. In an interview, Radley Horton, a climate researcher at Columbia University, said “The verdict is in: increasing greenhouse gas concentrations due to human activity – by raising average temperatures – have loaded the dice toward more frequent record-breaking heat extremes.” Karsten Haustein, a climate scientist at the University of Oxford, tweeted: “This. Is. Climate. Change.”

This avalanche of news came as a bit of a shock to me. I’ve worked in regenerative land, 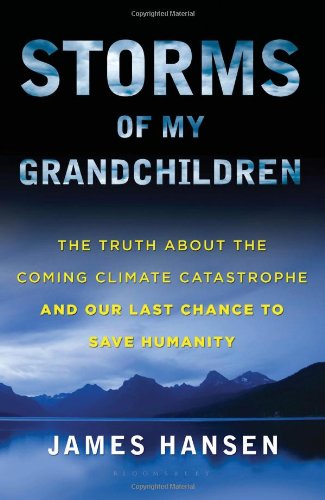 water, and food issues for many years and I have studied the effects of climate change but none of the research I read said conditions would deteriorate this fast. James Hansen, an esteemed climate scientist, warned in his 2010 book Storms of My Grandchildren that heat waves would be more intense and frequent with each passing year unless greenhouse gas emissions were reduced, but I thought he was writing about the world his grandchildren would inherit! Apparently, it was arriving much more quickly.

I had known for some time that we were careening toward a precipice, but I assumed we had time to take corrective action – and hopefully we still do. But these developments put my personal journey into sharp focus suddenly. I’ve been worried about our destructive habits for nearly all my life, first through the lens of archaeology, then land conservation, followed by my activism with the Quivira Coalition and book writing. Figuring out how “live on a patch of land without ruining it” as conservationist Aldo Leopold once described the “oldest task in history” has been the central tenet of my work. I never believed, however, that the “patch of land” would be the entire planet! Nor did I think our collective “task” would involve our salvation, in a sense. But it does now. Geophysical systems, including the climate, need to function properly to maintain habitable conditions for life on earth regardless if we live in unprecedented times or not. Incredibly, we’ve put some of them in jeopardy. How did that happen?

My anguished question now is a big one: What is earth for? I don’t have an answer and it’s unlikely that one will present itself during the remainder of my lifetime. But it’s worth investigating and for me that means looking back at how we arrived that this moment with the hope that it will shed some light on our predicament going forward. “What’s past is prologue,” Shakespeare told us more than four hundred years ago. Prophetic words in any age, but especially now.